Anna has won a dream vacation for two in the Maldives. And yet she now sits alone in paradise. A hot flirt with an Australian is just what she needs, which can develop even more on a lonely beach.

This is without a doubt one of the most beautiful beaches in the world. Anna sits in the sand, runs her hands through the white grains in front of her, which together feel like fine powder, while she looks at the shallow lagoon with brightly sparkling water – and thinks for a moment how it would be if Marc was next to her seated, she could snuggle into his shoulder while he kissed her on the forehead. A familiar feeling, but from the past. Anna had won the trip to the Maldives for two in a magazine. The first win of her life. Four days ago she arrived on the small island with the luxury resort. Alone. Two weeks ago she found out about Marc’s infidelity and broke up with him. She cried and suffered. But why cancel your dream vacation? Where better to distract yourself than in this wonderful place in the Indian Ocean?

For ten days, Anna lives in her own little pavilion right on the beach. From her bedroom she can step into her five meter long pool, which is surrounded by palm trees – or go a few steps further straight into the sea. Here it really looks like all these pictures on Instagram always show it. With hammocks hanging between palm trees. Swings standing in turquoise water. And hardly a soul far and wide. Although of course everything here is full of couples who are incredibly in love, often newlyweds. Most of the time they stay in their villas with towels folded in swans and rose petals on the bed and a love breakfast for two served floating in the pool. Only sometimes she sits between them in the restaurant or on a boat trip. Then you have to distract yourself well so as not to feel sorry for yourself.

One of the nicest distractions is Noah, the resort’s marine biologist, who accompanies the snorkeling and scuba diving trips. Originally from Australia, Noah has lived in the Maldives for three years. He has dark blond hair slicked back, skin intensely tanned by the sun, and muscles clearly visible through the short neoprene suit. The well-being and protection of marine animals is particularly important to him. With a serious look and a dazzling smile at the same time, he explains on each excursion how the group should behave underwater with respect for the turtles and whale sharks. Anna doesn’t really know anything else about Noah. And despite that, or perhaps because of it, he’s always on her mind here on vacation. So that Anna thinks of Marc as little as possible, she started on the second day after the trip, to think of Noah as much as possible. She imagined him brushing his wet hair away from his face, sliding the neoprene down his torso, pulling her close and kissing her passionately. Each time her thoughts go a little further. At some point she imagines him sliding his hands over her body. How his muscles move on her.

A date at the beach

Today she made the next boat trip and flirted with Noah uninhibitedly. She, who is actually rather reserved, doesn’t know exactly where she got the self-confidence for it. But here on vacation, after four days she felt more beautiful than ever. Her skin is slightly tanned and radiant, her hair lies better and she dispenses with the make-up she used to hide under, as if of her own accord. Look what you missed Marc! Noah should have that now, here on this holiday. She made that clear to him today. Beach pavilion number 13, that’s where he can find her. He knows it. That’s why Anna sits expectantly on the beach, just a few meters from the entrance to her bedroom. Far and wide there is no one else to be seen when Noah is already standing in front of her. He is wearing short black swimming trunks and a thin white T-shirt, he is barefoot like most people here in the Maldives. Hey, he says and sits down directly in front of Anna. He looks deep into her eyes. Anna smiles; he has come to fulfill their expectations.

Sex in a bed of white sand 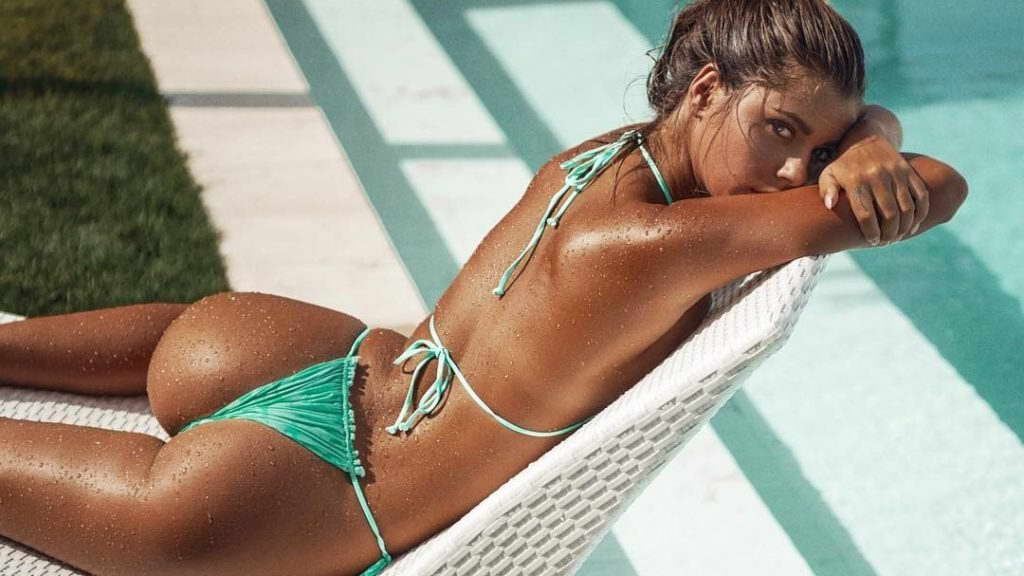 Noah wastes no time. He pulls her towards him, presses her upper body tightly against his, puts her legs around his waist and kisses her passionately. His hands reach to the spot on the back of her neck where her bathing suit is tied. With his right hand he unties the knot and pulls the fabric down to her navel, while his left hand grabs her breasts and alternately strokes her hard nipples with his fingers. He doesn’t stop kissing her. Not even when he pushes her back into the fine white sand, which feels like a bed of clouds on her back. He hastily removes his t-shirt before bending over her again, placing himself between her legs which she has bent, feet pressed into the sand and covered in the fine powder. Her hands claw at his back. How long she hadn’t wanted a man as much as Noah did right now, in this moment, in this place. He grabs her hands hooks his fingers in hers and slides her arms over her head into the sand. The feeling of his weight on her almost drives her insane.

Anna slowly releases her hands from his grip and lets them slip into Noah’s pants, which she pushes down over his buttocks in the same movement. He also knows how to use his free hands immediately. He now takes off her bathing suit completely, grasps her hips with both hands and pulls her close again through the soft sand. His hands feel their way between her thighs, cautiously, but he can feel how wet she is and that she wants more from him. That she wants everything from him. He kisses her gently, licking her lips, her chin, her neck before he presses her harder into the sand again and presses his loins between her legs. Noah is the adventure she wasn’t looking for and found in the Maldives. This is definitely the best beach in the world, Anna thinks again