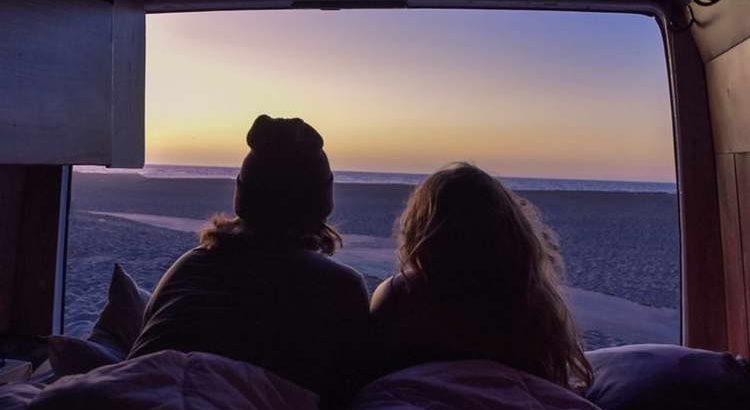 Ben knows that he can drive Caro crazy with his fingers. During the trip to the south of France on holiday, he shamelessly exploits this. A foreplay begins on the winding roads and culminates in an intense climax

Because the two still prefer not to take the plane to their summer vacation, Caro and Ben just go by car. From Munich to southern France. A good one thousand kilometres and around ten hours drive. It is the first holiday together, which was actually planned for April until the pandemic thwarted their plans. Finally. They rented a small house on the Côte d’Azur for two weeks just for themselves. For two weeks they will be together. Caro can’t wait to arrive. She has been with Ben for half a year. She still feels the initial excitement when she sees him. It hunts all over the body. Like right now, here behind the wheel. Carol is driving. And Ben doesn’t watch the incredible mountain scenery as they pass by, instead his eyes linger on her over and over again.

She, too, watches him out of the corner of her eye. His gentle eyes that reveal his loving character. Ben is incredibly polite and courteous, she immediately liked that about him. He makes her feel like her needs are important. Even the most important thing for him. She also observes his arms and hands resting calmly on his thighs. Those big hands with the long slender fingers that can drive her insane when they roam her body. And his strong arms, trained just right from rowing. No scary piles of muscle, just defined muscles that tense up when he picks her up to kiss her .

Caro is already realizing that the hours in the car will be like a ten-hour prelude to the holiday. She feels the anticipation with every fiber of her body. Of course she has expectations and romantic scenes in her head for weeks. Whenever she closes her eyes, her head cinema immediately starts to work. She and Ben in the morning after waking up between white linen blankets on which the sun shines. Ben passionately pulling her against him in the pool. And Ben bending over her body between lonely cliffs. Does Ben think the same? Also so excited is?

The foreplay in the car

Caro enjoys the car ride, the slight tingling in her stomach when she thinks about vacation, the rays of sunshine that tickle her skin when she looks out of the window and the landscape that quickly passes by in bright colors. Suddenly she feels his hand on her right leg, alternately stroking the fingertips and knuckles very gently from top to bottom over the thigh. your goosebumpsis so intense that every touch sends shivers down her spine. Does he actually know what he’s doing to her? With each movement from top to bottom and from bottom to top, Ben’s hand travels a little bit higher up her leg. Only touches the hem of her dress at first. And then slowly pushes it higher and higher. Caro smiles, blushes slightly and tries to keep concentrating on the track in front of them. At the same time she enjoys the touches. She hasn’t had enough, neither has Ben. He runs his hand to the inside of her thigh, wraps his whole hand around it, squeezing it tightly and pulling ever so slightly. Then he carefully hikes up, his fingers pushing forward. You know the way. The closer his hand gets, the more Caro can feel it getting wetter. Will Ben feel … Full Article